A short History of the Wedding Cake 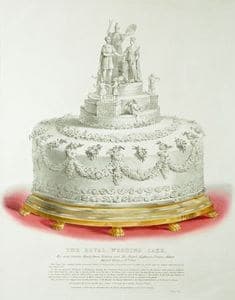 I thought I’d offer a brief distraction from these testing times, with a short history of the Wedding Cake.

The earliest incarnation began with the Romans. The groom would break a loaf made of barley over his wife’s head during the ceremony to symbolise fertility. I think most brides would say they’re happy this tradition has moved on (think of the wedding hair, people!). Although another slightly messy American custom for the bride and groom to smush cake into their spouse’s face still persists. Thankfully not something many British couples have adopted; surely a waste of good wedding cake?

During the 16th and 17th centuries it was customary to serve a bride pie at the wedding feast. These were usually savoury in flavour and contained such delicacies as oysters, sparrow brain and lamb testicles; all thought to have aphrodisiac qualities. By the 18th century the pie contained the more palatable mixture of mincemeat and fruit. Bridal cakes emerged around this time and evolved from a sweetened bread to plum cake, and then the fruit cake we know today.

By the time Queen Elizabeth II was married, the rationing of WW2 was in place. Her cake was made by McVitie and Price who would later go on to found the McVitie’s biscuit empire.

Thankfully these days things are a bit more relaxed when considering design and ingredients. The best thing about modern cakes is the freedom to choose the look and taste to suit your own preferences, but with a nod to a 2,000 year old tradition. I might draw the line at including oysters though!

Have a great week and I hope you can enjoy some delicious cake along the way.

Previous Next
Close
Test Caption
Test Description goes like this